After coming back from vacation and working nonstop on my Toronto Outdoor Art Exhibit application for the week leading up to the due date I didn't think that I was going to be creating any work to submit to Zilberschmuck's themed show that was due the following week.  Especially since I didn't initially have any ideas.  My mom came up with a great suggestion to make a garlic necklace and I was riding out that idea in my head before I thought about making evil eye jewellery while walking to the studio last Tuesday.  Most likely fueled by my lack of sleep (my own fault).  I am addicted to Top Chef and I "had to" watch the two episodes leading to the finale even though I have to wake up early on Tuesdays to open the studio.  Asinine, I know.  Apparently sleep deprivation leads to the impossible - attempting enameling things together that you have never done before.  The brooch was the result of painting a dapped copper circle.  Then there was the mutant eyeball. I had myself convinced that using a strong binder like A4 - which is like a glue that holds enamel in place - would also hold smaller dapped forms onto larger ones.  This is not the case.  It seemed like it was going to do the trick but after a few seconds in the kiln they slid off.  Time for a creative solution.  I decided that some well placed and carefully sized rings of cloisonne might do the trick and they did just that, phew!  The eyeballs did migrate a bit during the firing in the kiln so I kept a close watch on them and after a few attempts got the effect that I was hoping for.  I cannot overstate how much in love I am with the chartreuse colour of the mutant eyeball.  The finished product is equal parts nouveau zombie and world of goo which makes me smile.  Semi related side note: I was uber excited that Lianne was in the studio today so that I could gush and discuss the latest episode of the Walking Dead. 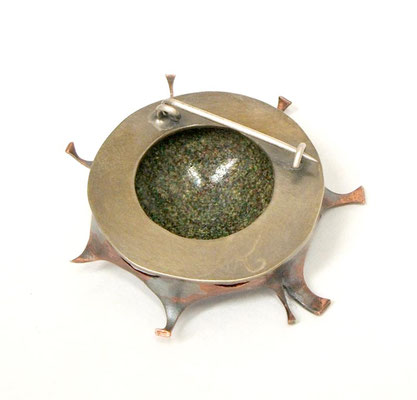 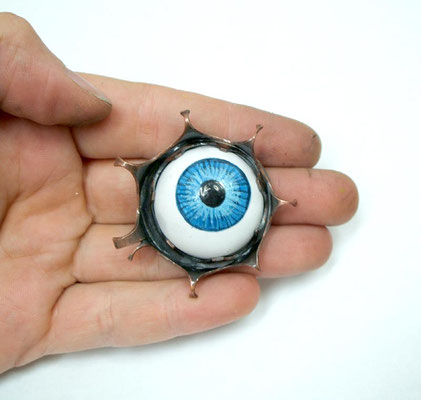 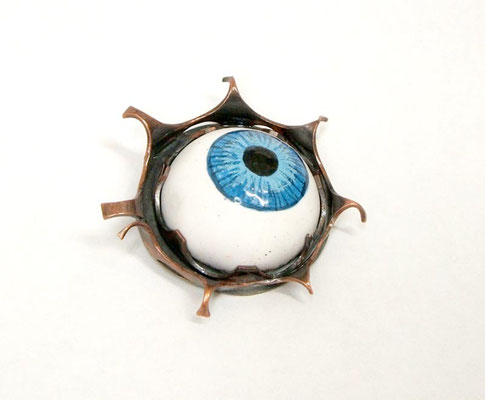 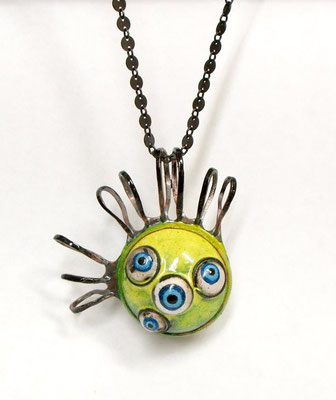 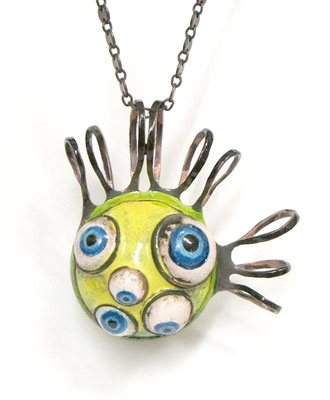 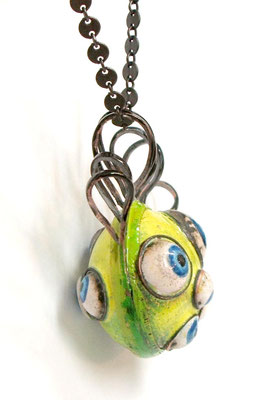 So, I present to you my submissions for Superstition.  Their arrival comes after two failed attempts, one melted piece, one ridiculously ass backward fabricated ring, and another ring that got close to being finished.  That is until I decided to plunk the eyeball in place to see how it would look disregarding that it was not yet polished and there was no way to remove the eye without damaging it... sigh.

The brooch and pendant ended up being made from scraps of metal that are cast-offs after punching out discs... great for creating eyelashes apparently.  And that chain that I thought I hated some how worked out just right for the final touch.  I often find that when I am scrounging for materials and trying to throw things together that I wouldn't have initially thought of while drawing out a design I end up much more satisfied about the results.

Questions, comments, or to book a free consultation: